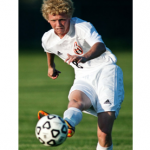 If there’s one constant for United Township senior defender Ben Jackson, it’s that he’s always looking for a way to help.
Off the field, he donates his time to his community by raising money to feed the hungry. During the Panthers’ practices, he takes responsibility for helping his younger teammates adjust to the varsity level, serving as one of the team’s captains.
“I really like to help out a lot,” Jackson said. “I like the feeling of knowing I’m looked up to and I like helping people. No matter where it’s at, I like being a helpful person.”
As his senior year progresses, his goal to help United Township bring home the Western Big Six title that has eluded UT for years is right on track. The Panthers are off to a 3-1-1 start, which includes a win over longtime nemesis Quincy.
A large part of the success is Jackson, who has embraced his role as a captain from the beginning of the season. UT coach Phil Weaver admitted that role can sometimes be difficult because some captains focus too much on other players, but that’s not a concern with Jackson.
“I think he’s got broad shoulders,” Weaver said. “He’s a bright kid and can take criticism whichever way you throw it at him. He’s the type of player that deals with it and understands what the points are that we’re trying to make to improve his game.”
“When you look at Ben or (fellow captains) Dustin (Bartz) or Nico (Moreno), when you present a task to them, not just concerning their own individual game, they go about it the right way.”
That’s how Jackson has always been, on or off the pitch. When he started as a freshman, he became involved in the school’s student council, which led him to start participating in hunger drives.
The cause has become even more important as time has gone on, with soccer being one of the reasons.
“(Teammate) Mamadou (Ba) is from Africa, and that touches home with me,” Jackson said. “There’s a lot of people starving in Africa, and there’s people over here starving. Not everyone can support themselves, so I like to help them out.”
Jackson plans to remain active in hunger drives when he heads to college, where he intends to begin working toward helping people in a new way by becoming a sports physician.
“I’ve been playing sports since I was 4 years old,” Jackson said. “If someone’s hurt, I want to be the guy they come to that can help them get back on the field and help them be a better player.”
That desire is partly because of his experience last spring, when he recovered from a hamstring injury in his right leg in time to run at the Class 3A state track meet on the Panthers’ 800-meter relay team.
“When I injured my hamstring, I noticed our trainer, how much he helped me get back on the track right away,” Jackson said. “He showed me that’s an asset, that he could help us that easily. It was nice to know he was willing to do that, and I wasn’t the only one. He helped us get back on the track to tie for the conference (title).”
That experience has him committed to getting an athletic scholarship so he can afford the 13 years of college it will take for him to earn his doctorate degree.
Although he’s generated interest from track programs and would be perfectly happy with a track scholarship, he admits he’d miss soccer. As usual, the reason involves his desire to work with others.
“Soccer helps me become a better person overall because I have to bond with people on the team,” Jackson said. “But in track, I run individual events unless I’m in a relay, so I’m not really bonding with everyone.”
“In soccer, you have a team working together, and unlike football, soccer doesn’t have certain plays. You make it up as you go, and you’ve got to think on your feet. That’s what I love about it.”

Ben is the son of Brian/Jennifer (Reyes) Meyers

0 thoughts on “Lost and Found/Ben Jackson”