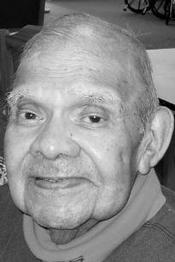 Julien was a member of St. Mary’s Cathedral where the visitation will be on Tuesday, November 13 from 4-8 p.m. with recitation of the Rosary at 8 p.m. The funeral Mass will be at 11a.m. on Wednesday, November 14 at St. Mary’s Cathedral, 607 NE Madison Ave, Peoria, with Father Angel Sierra and Father Martin Mwongyera officiating. Additional visitation will be one hour before services at the church.  Burial will be in Resurrection Cemetery. Military rites will be performed by the U.S. Army and American Legion Post 2 Honor Guard.

He is survived by his children, Michael, Mary, and Rebecca Sierra of Peoria, Martha (Edward Perry) Sierra-Perry of Urbana, Stephanie (Thomas Theado) Sierra of Amherst, OH, Jerome Sierra of Rock Island, Timothy (Rita) Sierra of Pekin, Julien Anthony Sierra of Los Angeles, CA, and Lisa (Richard) Campbell of Springfield; fifteen grandchildren; eleven great-grandchildren; one sister, Miquela “Mickey” Molina of East Moline; and many nieces and nephews. He was preceded in death by son, Joseph; grandson, Matthew, and ten brothers and a sister.

Julien served in World War II in the European theater in Company C 395, Infantry, 1st battalion, 1st platoon.  He was promoted on the field to the rank of Staff Sargent during the Battle of the Bulge.  He was a Charter Member of YBarre Gomez VFW Post 8890 in Silvis.

Following his service to his country, he graduated with a B.S. from St. Ambrose College. He was a member of the American Society for Clinical Pathology. He was a full-time registered Medical Technologist for Proctor Community Hospital and Methodist Medical Center for nearly 25 years and worked part-time for Dr. Robert Hart.

Julien credited his deep Roman Catholic faith and educational success to the Quad-City Catholic grade school he attended. This prompted his commitment to and support of Catholic school education for his children. All graduated from Spalding and the Academy of Our Lady. He encouraged his children to read the news and follow current events in order to act on matters of social justice.

He was an avid Chicago White Sox fan and enjoyed watching and attending games with his children and extended family. While doing post-graduate work at the University of Illinois, he became a fan of Illinois sports. Julien enjoyed theatrical performances, and was a long-time member of the Broadway Theater League. He was a life-long Democrat.

Tributes and condolences may be submitted to www.wrightandsalmon.com.